Famous
I saw where a new album by Yes was released a couple of days ago. Still waiting on my CD copy, but I got on Grooveshark and listened. Not too bad. 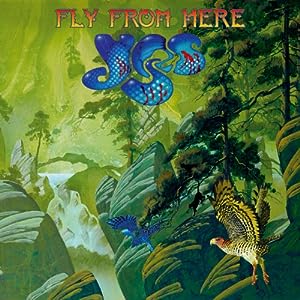 If you're fans of the older 70s Yes, you may or may not like it. If you liked (especially) the 1980 Drama album and 90125, it's worth a listen as you will like it. Drama was the first and only album without singer Jon Anderson....until now.

Just like with Drama, Jon is no longer at the wheel in this album, but a singer named Benoit David. Also, Wakeman has departed (again :roll: ) to be replaced by Geoff Downes from the 80s bands The Buggles and Asia (who also had Steve Howe). Trevor Horn (also of the Buggles) is the album producer, who also produced Drama....see the connections?

David does a pretty good job imo. At times he sounds like Anderson and other times, he sounds like Trevor Horn. Maybe he's their bastard child, who knows? The title track is a rework of a tune that never made it on Drama, but was played a lot live during that album's tour. The other tracks are pretty catchy and of course, there is a new acoustic solo from Howe, which is very very good (I could listen to him play all day).

I've listened to it about 5 times in a row and I like it more and more with each listen. I still do not like it as well as later releases like The Ladder and the (especially) the two Keys To Ascension albums, but I think I'm going to like this new direction they are headed. Can't wait to fire up the CD when it gets here.

Superstar
Cool! Jon Anderson is the factor that keeps me from being a huge Yes fan, so I'll have to check this one out. :handgestures-thumbup:

Famous
Thanks for posting, I am a huge Yes Fan!

I was not aware that this was being released.

Famous
Thanks for the heads up Yesfan, I'll have to check it out.

heeman said:
Thanks for posting, I am a huge Yes Fan!

I was not aware that this was being released.
Click to expand...

Me either, until yesterday. What really pisses me off, as I found out last night, is they are also going to be in Nashville tomorrow night. That's very tempting.

Botch said:
Cool! Jon Anderson is the factor that keeps me from being a huge Yes fan, so I'll have to check this one out. :handgestures-thumbup:
Click to expand...

You don't like Jon Anderson? That's a new one for me. For me, Trevor Rabin is probably my least favorite Yesman of the main 8 members. My favorite line up is the Fragile line up (Anderson, Bruford, Wakeman, Howe, & Squire).

I don't count the members like Downes, Benoit David, Billy Sherwood, etc. as they have only been on two albums at the most.

Famous
I thought that Relayer with Patrick Moraz on keyboards was one of their real good albums.

I have never been a big fan of Alan White on the drums, however I guess he does fit well with the others in the band.

I am looking forward to hearing the new CD.

I only saw them live once at the Nassau Colosium on LI NY back in 1978. They played in the round and we had good seats!

Famous
I've seen them 5 times since 1994. The only one member from the "main 8" I haven't seen was Bruford.