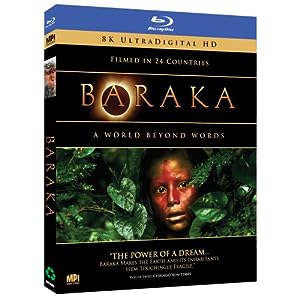 Matt, I want to thank you for bringing this to my attention at Bat's this summer. I finally got around to getting a copy of this on BD because of that preview, and am totally floored.

First, my daughters and I watched about an hour of it a few days ago, and they were completely entranced. This movie is mesmerizing! Of course, they had a million questions about what they were seeing, which got kinda uncomfortable when it got to the part about the Nazi and Cambodian death camps... But they were completely fascinated.

Second, I had no idea at all what the history of this film was. I assumed it was some modern thing filmed in imax or something. But no, it was made 20 years ago! :bow-blue: The "extra" on the BD explains a little about how it was remastered, and I gotta say, it's amazing. Yeah I've only got a paltry 46" lcd screen to watch it on, but watching some of it in the batcave on that huge screen with a top notch projector was just as amazing, relatively speaking. Just... wow.

This is definitely something I will watch again many times. Here again is a rare case of where the "extras" on the BD, which I watched all of tonight, are almost as interesting as the original movie, because they talk about how it was made and what they went through during the filming, a rare glimpse at a non-hollywood production of true cinematographic art. This is not a field where I have any expertise, but it really pulled me in and gave me a greater appreciation of the technical hurdles in something like this.

Anyway, if you have not seen this movie, or have not seen it on blu-ray, I HIGHLY recommend you get a copy and check it out. It's one of the most unique and intellectually and even spiritually engrossing movies I've ever seen.

Superstar
One of my favorites!

I almost never watch the "extras" on a disk, but sounds like this one I should make an exception, thanks!

Staff member
Moderator
I can't recall his name (was it ender?) but there was a member at S&V who played some part vin the transfer. I got it on his recommendation. I haven't seen it on the projector just yet, maybe once it's calibrated next weekend.

Towen7 said:
I can't recall his name (was it ender?) but there was a member at S&V who played some part vin the transfer. I got it on his recommendation. I haven't seen it on the projector just yet, maybe once it's calibrated next weekend.
Click to expand...

I also remember a member at S&V being a part of the transfer process to BD, in fact that transfer to BD won awards.

Staff member
Moderator
Found it... It was ender21 who talked about it back in 2008.

Shot in breathtaking 70mm in 24 countries on six continents, BARAKA is a transcendent global tour that explores the sights and sounds of the human condition like nothing you ve ever seen or felt before. These are the wonders of a world without words, viewed through man and nature s own prisms of symmetry, savagery, harmony and chaos.

BARAKA produced by Mark Magidson and directed and photographed by Ron Fricke, award-winning cinematographer of KOYAANISQATSI and creators of the IMAX® sensation CHRONOS has now been fully restored from its original camera negative via state-of-the-art 8K UltraDigital mastering to create the most visually stunning Blu-ray ever made.


Blu-Ray.com
" ... the film represents the current zenith of Blu-ray picture quality. The depth, clarity, and color reproduction of the film is incredible. Each scene provides awe-inspiring, reference-quality imagery that effortlessly places the viewer within each frame of the film regardless of its locale on the world's surface. "

Famous
"Baraka" has been shot entirely on 70 mm film for the best possible image quality. The high definition transfer comes straight from the film's 5 perforation intermediate, scanned in 8k resolution and down-converted to 1080p. I was a little surprised to see that there is some amount of grain visible in the picture, which is unusual for 70mm elements that are typically used for the very purpose to minimize grain. At the same time, it gives the transfer a very film-like look and the transfer's incredible level of detail will simply blow you away. With razor sharp edges and a definition that shows even the most minute details in the image, the image is sure to impress. Add to it the incredibly rich colors and you will stare at the screen in sheer awe more than once. The deep black levels help to create a rich contrast that gives the image incredible visual depth and when you're overlooking the Grand Canyon, you may feel as if you're going to fall any second - that's how real the picture looks.

This high definition release from MPI Homve Video boasts a DTS 5.1 HD Master Audio track, as well as a Dolby Digital 5.1 track. The music of the film is noteworthy for its focus and ability not to distract from the pictures you're watching while always setting the right mood. Having the wonderful score presented her in its 96kHz/24bit glory is another reason that makes "Baraka" so remarkable. The track makes good use of the entire audio spectrum, including a surprisingly strong bass extension. The surrounds are included in the mix of the soundtrack to create a truly engulfing surround experience throughout the 97-minute film. Perfectly timing some of the music with the images, and masterfully combining ethnical and musical elements from the parts of the world we see at any one time, the soundtrack is a monumental piece of music that thematically travels around the world, just as the film
does.

Famous
Pauly glad you and your family enjoyed it. It truly is a fantastic bluray to watch even though there is not one spoken word in the entire film. Yeah seeing it at bats top of the line theater brought this film to a whole nother level.

Famous
First had this on DVD and it was one of the first three BD's I bought.

When friends first get a BD player I give them this film as a gift as I think it is one of the best demo discs around and transcends most individual tastes.

Staff member
Administrator
Moderator
Superstar
Yup. Technically outstanding. But I want to stress that it's not just a pretty picture on the screen, it's really an interesting and engrossing movie. Yeah may be old news to many of you, as usual I'm a bit behind - about 20 years in this case.
You must log in or register to reply here.
Share:
Facebook Twitter Reddit Pinterest Tumblr WhatsApp Email Share Link
Top