Famous
Its difficult to find the first few words to describe an event. the writing must be done as fresh as blood would be, until it turns darker with time, difficult to remember key parts of an event.

I watched Sade in concert last night, with John Legend as her opening act. Stellar. Simply felt like seeing an old friend. Sophisticated.

On the way to the concert i can see the night would be an interesting one. Ive never thought there'd be such a thing as a bad cleavage night. with women dressed to kill, some with seduction, some with murder, some, well, like there wasnt a pulse on em.

Anyways, concert started solid. extremely amazing performance by John Legend. not a big fan, but i can see a great amount of maturity in how he handled himself.

Then the lights went out, and it was every breathtaking moment after another.

Some songs i wasnt familiar with, mostly the new material, but man, when the old stuff comes around - it hits you. it hits you hard enough to weep a tear, knowing that time has given you the chance to see her in her full glory - knowing that you may possibly not see this again.

The last concert she had, my sister wanted to see her at the Shoreline - 2001if im not mistaken. Lovers live.

She's regret that until last night. We were intoxicated (well, sister drank a couple, and i got a little beer poured on me... on a side note: it seems to always happen when they say 'stand up and dance' or something similar).

Till Elton John and Billy Joels concert, Buble, this is indeed the best concert ive experienced.

On rant i have is the experience, like movie theaters, can be tremendously ruined not by the artist, the venue, but by the crowd itself. Pot smokers will always be there, but i guess, if i lit up a cigarette that would change the entire scenario. Flash photography, well, pretty eminent as well, to the point where this lady kept on laughing even after politely reminded by the usherette no flash photography. (to the photographers - you know what happens when you fire a flash in low light - sadly they expect the best pictures)...

I left my camera. I have a canon elph 300HS which i bought recently for low light functions, but thought - aside from what would happen if they want us to turn it in, what would the moment be, how would it change with me focused on taking pictures. Granted they allowed it (P&S cameras only), i thought and am 80% thankful i didnt bring it. Like the analogy ive had with museums - it becomes a part of the moment you stressfully try to do, instead of absorb it within yourself. Take pictures sure, but memories will always be sweeter when you remember it for other reasons.

I am happy. Extremely happy i watched Sade. If ever she performs again after ten years, i would gladly pay top dollar to watch her again.

As a news article quoted Sade,

"It took us a long time to find our way here," she told the near-capacity house. "But we finally found you — San Jose. Thank you for holding out all these years."

It was the most sincerest compliment a performer has given us.

Superstar
Re: Concerts - the best experiences you've had. Sade 08/25/1

i actually bought the concert lovers rock on dvd after finding out about her performance on the shoreline, and realized what i missed. oh how i regret not going, and wish i pushed myself to go. nonetheless, i liked the pacing, it wasnt as 'slow' as i found lovers rock to be. i PREFER the older concert on dvd she had, im too lazy to look it up via amazon, but heres the picture. (its also friday, been busy). 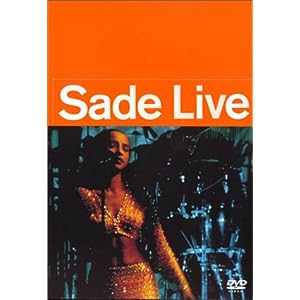 on a sentimental note, when she sang one song (id have to remember which one), she had a wonderful, amazing video projected, showing a montage of the bands history. from the looks of it, it seemed that the band was with her from start to finish, only introducing new members recently. i found that heartfelt and amazingly personal for her to share with us.

i applaud the lighting and soundstage people. it was amazing how they used dimensionality of the stage and incorporate it with the 'show'. a great example was using drapes at one point, some beautiful blood red drapes fell upon the stage, a couple unravelled, and well, it was beautiful. at times they had a projector on 'drapery', those that normally hang above a kitchen window, like a forefront area, then the background was a city background. it was amazing - a 60s decal kinda thing on front, then showed back allies, city backgrounds, and suddenly smooth operator played.

all these memories rush thru me, reminding me i am alive. i truly appreciate a good concert to stir up the soul.

I remember the first time I saw the video for "Smooth Operator". I was mesmerized by her voice. I think she exudes sexiness inside and out.

Superstar
Re: Concerts - the best experiences you've had. Sade 08/25/1

Still hot and that concert DVD is way good.

Superstar
Wow, this thread went back a ways!
Saw this on EweTube just now, nice dissection of an incredibly simple bass part (totally opposite of the Mark King/Tony Levin vids I've posted before) that just, FITS the song, and the groove. Love this stuff.

Superstar
Oh man, this video may have ruined Sade for me; but hopefully not:


Sade sings just slightly... sharp! This guy's processing software proved it, and sure enough I could hear it myself, especially when he solo'ed her vox at about the 2/3rds mark (the last 1/3 of the video is not really worth watching, at least for this comment).

Here's part of what I posted:

On the Getz/Gilberto album (can't remember the name, had "Girl from Ipanema" on it) Gilberto's wife sang on many of the tunes, and she was absolutely, consistently about a quarter-tone flat, and I can't listen to it anymore, despite all the other good music on it. Conversely, the lead singer for the Marshall Tucker Band was a bit sharp on the one studio album I have, but the live album I heard he was so badly sharp that that, too, was unlistenable. I have Perfect Pitch, and yeah I can hear that Sade is just a bit high, especially at the end when you soloed her vox. Hopefully, I won't be listening for it in the future; as I said, she's one of my favorites. Nice analysis!
Click to expand...