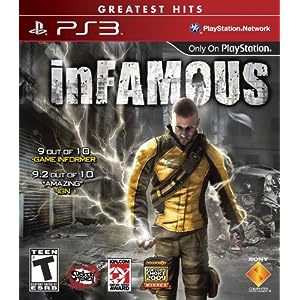 Playing this one the past few days. Good game! It's kind of the standard action-adventure format, where you have quests, sub-quests, buildup of powers - in this case, electricity-based attacks, collecting of various special objects, etc. You run around healing innocents (well assuming you play the good guy track and not evil...), defeating enemies, recharging at any public source of electricity like light poles, telephone booths, etc. So the format isn't too original, but the setting is cool, graphics are very good, has some nice comic-style cut scenes during plot progression, lots of little character commentary as he's running around getting ambushed by enemies (like "this sucks worse than Lionheart comics!"). The most fun part, to me anyway, is you get to climb all over buildings - and jump off of them! You can't die by falling, in fact there are even special high jump attacks. It's refreshing, esp. after playing Uncharted 2.