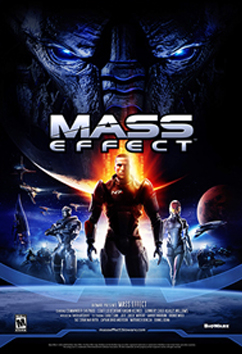 Been thinking about trying this one for a long time, finally decided to give it a go. Since the sequel is already out, the original is very cheap now - I think I got it for $8. First PC game I've played in quite a while (I think since Oblivion), and I'm pleased with the experience compared with the PS3. For a relatively complex control system like this game has, keyboard control is actually a plus. And the graphics are fine and easily comparable to anything on the PS3. Guess that's not surprising since the base PS3 graphics hardware is pretty ancient now, in this age of rapidly advancing GPU tech. Anyway, my 2-yo ATI HD 4850 is keeping up okay with this game. I worry that if I do the sequel, I'll have to upgrade the GPU... seems to always happen when you want to play the latest PC game!

Anyway, this is a good space adventure style game. Yeah there's some combat, but it's not the focus. It's got a good engaging story behind it, and millions of little side quests.

Yeah yeah, we all know you just want to see the lesbian space aliens make out!!!

Staff member
Administrator
Moderator
Superstar
Ha! Haven't gotten to that yet, if it exists... I heard there's a potential (depending on your in-game choices) for a hetero sex scene, anything else may be just a rumor? Not sure. I'll be sure to do a screen capture for you if I do get here.

Staff member
Moderator
Famous
Just picked the Mass Effect trilogy up for $60 at BB last night. Can't wait to dive in, Jo is gonna kill me if it turns out to be good cause I'm gonna disappear into the batcave for a while...