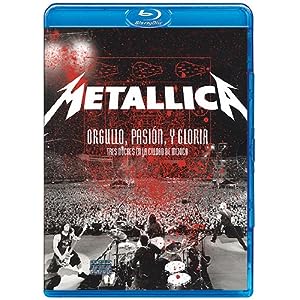 Fantastic audio and video, worth every penny of the $40 I spent!

All the interviews are in Spanish, but there's not really that much there.... The PQ is out-fucking-standing!

When I was a teen I was a HUGE Metallica fan but never got to see them live. I don't think I'd go now to avoid hearing that garbage they've been trying to sell as Metallica. I'd love to check this out if they play a good amount of the old stuff.

Stuff from almost every album:

The Ecstasy Of Gold
Creeping Death
For Whom The Bell Tolls
Ride The Lightning
Disposable Heroes
One
Broken, Beat & Scarred
The Memory Remains
Sad But True
The Unforgiven
All Nightmare Long
The Day That Never Comes
Master Of Puppets
Fight Fire With Fire
Nothing Else Matters
Enter Sandman
The Wait
Hit The Lights
Seek & Destroy

I haven't bought that one yet because of the price but I bought the one they did in France. Great picture and sound.

I totally agree with -B-...........anything after Justice is just shit. Also I cant stand the fact that Hetfield now actually tries to "sing", especially on the old stuff.


lulimet said:
I haven't bought that one yet because of the price but I bought the one they did in France. Great picture and sound.

I bought my copy off ebay. I think it was $28 shipped.
I read some of the amazon reviews and people are saying to order it from the UK amazon because it's like $25 shipped.

Damn, I missed this, but then again it's been a while sense I've been here. Me personally, anything after the self titled "Black" album isn't worth much, but Death Magnetic is on the right track. If you haven't seen Some Kind of Monster, I suggest you do. It explains a lot of what and why things went the way they did in those few albums (Load, ReLoad, St.Anger).

I'm going to have to get one of those BD's now. My first musical BD disc I'm watching now, which is what prompted me to get on here, is Water On the Road, Eddie Vedder Live, but that'll be in it's own thread.

On a plus for me, I've seen Metallica 3 times, the last time was the Cunning Stunts tour. Was actually really good. I'll go see them again, and again...... and again. They'll always play a decent amount of their old stuff, so for that I will keep going.

I would have seen the S&M show(s). But, other than that I have seen them 4 times and I have never thought they were good in concert. I think they are a lot like Motley Crue in concert, they seem to overplay and worry more about being loud than sounding good.

After seing bands like the Scorpions years ago and more recently bands like Godsmack and Shinedown, who are all amazing in concert and sound excellent, I would really prefer to see bands that you can actually identify the songs they are playing.

I saw the S&M on MTV back when it came out, love it. Wonder if it'll make it to BD?

One of the bestseller shows I went to was Ozzfest 97. Was there to see PANTERA for the 4th, and sadly, final time. I wish they'd release a BD concert.

D, bring this with you.

Bringing a handful of concert Blurays, this is definitely one of them.