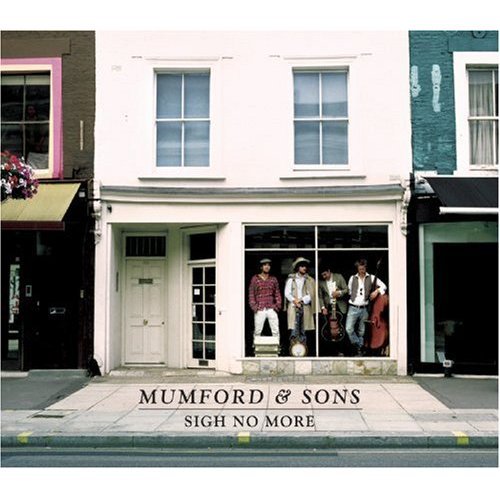 Ok yeah I know I've posted about this a few times, even recently. But it's been going through my head all week, and it (along with that Sarah Jarosz one) is an "album of the month" for me. And so I decided it deserved its own thread.

This is pretty serious music; not many tracks - except maybe Little Lion Man - really stand out as easy listening or popular radio type songs. But the album as a whole, that's a different story. There's a real arc to the album in this one, and some great - dare I say almost classical - complexity to it, in the music and the use of real dynamics. Terrific musical composition and instrumental arrangement and performance. Very nice vocals and vocal harmony. Good recording quality too, as there are some parts that have a very immersive feel even in this 2-channel recording, and vocals with great presence.

The lyrics... well, 80% of the time I haven't got a fuckin' clue what they're talking about. But in a way I like that with this album, because it makes the songs not "about" something because of the words alone, you have to really get into the music more to sense something going on, and it's a bit more abstract. This is a personal thing with me, I often feel that words simply distract from the music, but that's not the case in this one.

This is not a casual album. It's one of those where - as I did this evening - you need to set aside an hour free of distraction, get a glass of wine, and really give it some attention. It'll give back.

I like 'em. Did you happen to see their performance at the most recent Grammy Awards? It was a complete face melter. The Avett Brothers were good too. Anyone else thing the Mumford front man looks like Tim Tebow?

Staff member
Administrator
Moderator
Superstar
Nice, thanks for the video! No, didn't see that as I don't really watch TV... They have a very big sound for four guys. Though I guess they've got some backup there... on the album too on some tracks.

Staff member
Moderator
Famous
They're pretty good I'd say although I haven't heard the entire album. I hear them A LOT on Alt Nation so they are a bit overexposed like many bands that quickly catch fire. I've grown a bit tired of their 2-3 "singles" as a result. Would you mind bringing the CD when you guys come up so I can get a better feel for the album?

Had never heard of Mumford & Sons until their stint on the Grammys. Bought their CD as a result (as I did for several acts - something the Grammys ARE good for) and found it to be an enjoyable, repeat listen.

Staff member
Administrator
Moderator
Superstar
Cool. Jeff, you might also want to check out The New Pornographers, another great Canadian (well mostly, except Neko) band, in particular their latest album - Together.

Well, after starting a war on the unknown great albums thread, I'm here.

I must say that for me being part Irish, I REALLY REALLY REALLY REALLY love this album. It's what I listen to to go to sleep. This is easily one of my favorite albums ever and easily of the year. As noted, the record quality and the dynamics and subtleties are part of what appeals to me in this album. I hope they come out with another album soon, something the same, but different, you know what I mean?

Staff member
Administrator
Moderator
Superstar
Yeah, I'm anxiously awaiting their next release as well, hope they can live up to expectations!


I still listen to this album at least once a week.

I listen to it nightly.

AndySTL said:
I like 'em. Did you happen to see their performance at the most recent Grammy Awards? It was a complete face melter. The Avett Brothers were good too. Anyone else thing the Mumford front man looks like Tim Tebow?

I finally watched the above vid and have a confession/retraction. I have heard THAT song before I just had no idea who sang it.

Sorry for all the trouble.

smgreen20 said:
I listen to it nightly.
Click to expand...

Yeah I think it's time for another listen. Got my work done for today, M&S and a good bourbon will make for a very pleasant afternoon!

Staff member
Administrator
Moderator
Superstar
Indeed, this listening brought tears to my eyes, and yeah the bourbon had something to do with it (see my other thread) but still this music is amazing.

Let me respond a bit to some of the comments others have made in this and the "obscure music" thread. Yeah, Mumford & Sons is popular, but IMNSHO this is one of those rare cases where the popularity is truly deserved, not just because of marketing (like NSync or Lady Gaga or whatever). If you have not heard this album - and I mean the WHOLE album - then don't judge these guys based on a few overplayed tracks. My favorite track, "Thistle & Weeds," is probably the least likely to be a "single" in the radio sense. But it has a wonderful sense of building and dynamics that you just don't get from any other rock band (in my admittedly somewhat limited experience). And that's closely followed - in fact the two songs continue one into the other without pause - by "Awake My Soul" (see my sig ) which make an amazing peak to the arc that is this album as a whole. You just wouldn't get that from hearing isolated tracks.

And the lyrics... as I've said before, lyrics are almost completely irrelevant to me, in general. But these are interesting, and really do add something for me. There's an undercurrent of religious sentiment in this album (Awake My Soul, Roll Away Your Stone, etc.), that personally I find interesting. And also a sense of introspection and intimate experience and feeling. As I've said before, the lyrics are somewhat obscure to me, so much of the time I don't have any clue what they're really talking about, but it adds to the mood nonetheless.

But the main thing about this album is that - again IMHO - it's a truly unique sound. Yeah they use a lot of acoustic instruments, and have a bit of the British Isles sound to them. But don't think of them as an "Irish band." There's no fiddle. Plus AFAIK they're from London. There's a greater depth here than you get from almost any sort of traditional folk music. These guys are new and different, and I hope to hell that any subsequent albums they produce can live up to expectations.

So ok you can ignore this half-drunken post if you want to but if you haven't heard this album in its entirety, then I beg you to do so. In fact, if anyone is hesitant to pay for this album, I will loan you my own copy - just send me a PM and I will send it to you free of charge, on the condition that you (eventually) mail it back to me, or to someone else who responds to this thread. I have it ripped into my library of course, so I won't be missing out in the meantime.

Batman - you ripped my copy of this album a while back, any thoughts, have you listened to it yet?

Staff member
Moderator
Famous
Pauly, sorry no but it is on the top of my music list to check out. I've simply been too busy to give it a fair listen...

Famous
Anyone else noticed in the video how everything's reversed? I thought it was odd that all the players in M&S were lefties, until I saw the brand label on the keyboards were backwards.

And yes, that guy for M&S does look like Tebow.

I'm not at home to look it up, but M&S and Flogging Molly (one of my other face) are going to be on a PBS show tomorrow. I have my DVR set to record.

The show was Austin City Limits.


As for who Mr. Mumford look like, after seeing the show I think he looks a lot like Brendan Fraser.

I signed up on the mumford and sons home page and there's a forum section and I was looking for updates on a new album. They're in the studio right now but the cool thing is they're realising a 3 disc set of their debut album. One of the discs is a DVD. Also to note, a live set and a new song. Due out around october 24th ,not 00%sure of the exact date.

Staff member
Moderator
Based on what I've heard so far im not a fan. I figured i wasnt giving this band a fair chance so I bought the disc today and listened to every track. To be honest the tracks I liked best were the ones I'd already heard.

I don't get the hysteria.

To be fair I was distracted so I'll follow the doctor's advice and set aside some time to just listed to this disc with a bottle of wine.

Staff member
Administrator
Moderator
Superstar
T, I wasn't 100% thrilled by it the first time I listened to it either. I think I probably had it for ~6 months before I really got into it. Not even sure what changed in that time... just one day after setting it aside for a while, I listened to it again and was floored. I can't explain it.