Well, we are very soon going to be getting started on finishing our basement. For now, i'm hoping to get some feedback on the plans, as we need to submit them for permits ASAP. The basics:

- House built in 1958
- Basement height is 7'10", so probably leaving about 7'4" after finishing
- Basement is totally dry, and does not have a sump pump (basically no chance of having water problems)
- Will do drywall ceilings in most of it, but drop ceilings in the bedroom where there are pipes, etc we may want to access
- My dad is an electrical contractor, so he'll be doing all the electrical work (he already put in a brand new 200 amp panel)
- There are two egresses, a stairwell going upstairs, and another stairwell going right into the garage
- We plan to do a bathroom eventually (it's shown on plans), but not initially, to save money/time, so just ignore that for now


Ok, onto the plan. Here is our current design. 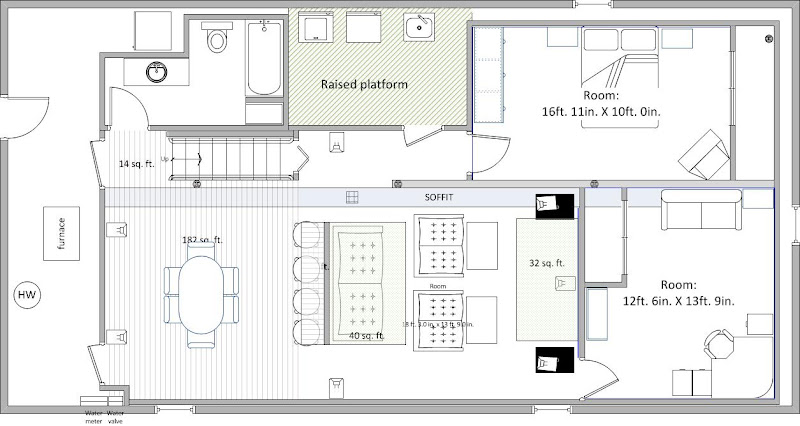 Here would be the front view of the screen wall: 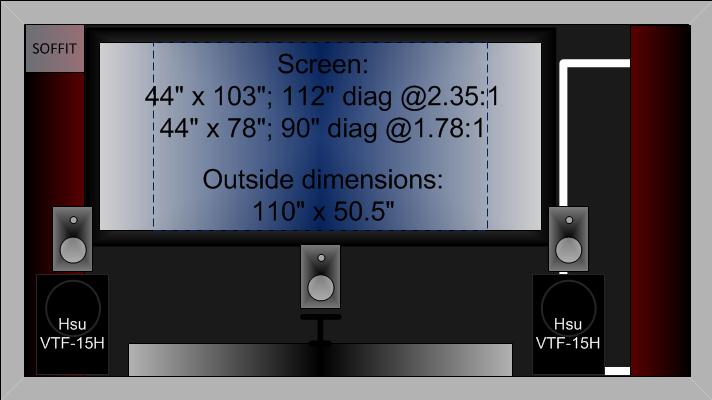 Here's the side view of the theater room:

Just the theater, with the rack under the stairs and OC703 panels on walls: 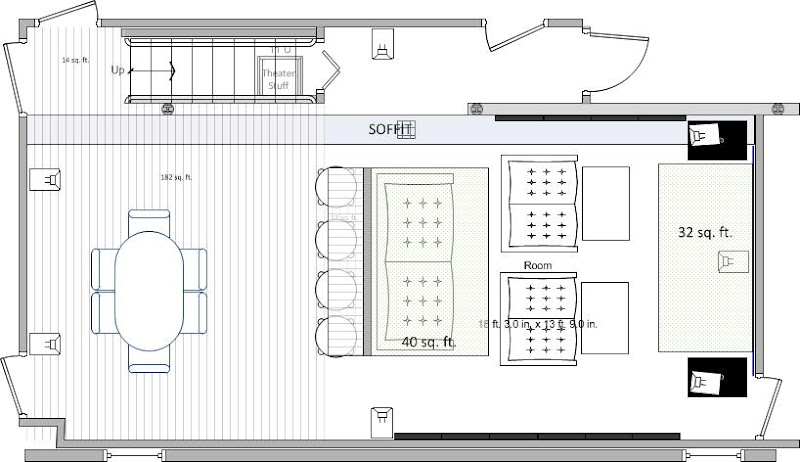 And finally, what we've come up with to submit for permit: So, any comments? Do you think that drawing will suffice for permits? I'll go into planned/proposed equipment for the theater in a little bit.
O

As far as the ceiling treatment goes, you may want to consider soundproofing - i.e. insulation, 2 layers of sheetrock, etc. Batman can certainly give you some insight on that from when he did his HT.

Wait. Don't you have two pb13s? What happened to the SVSs?
Oh and thanks for showing up right after I bought a used car! Your ears must have been burning!

I should mention, nothing is actually bought yet, in terms of theater equipment (some drywall, studs, the subflooring, but that's it). So there's nothing to be jealous of yet. I currently have Paradigm Studio 60s in the living room, with an old Acoustic Research 12" sub. No SVSs for me, unfortunately.

saldog said:
Ok, onto the plan. Here is our current design.

Are you building rooms within room?

The plan shows only 1 stair.

Do you think that drawing will suffice for permits?
Click to expand...

What kind of permit, zoning, building, electrical or some other type? It all depends on your local code requirements.

Do you have a plan showing the existing condition (as is)?

Staff member
Administrator
Moderator
Superstar
Oooohhh, fun! If you're gonna go all-out on this, any chance of breaking down the wall that leads to that room behind the screen? If you could push the HD all the way in there, you'd be able to obtain better symmetry, room for a bigger screen, and a slightly wider seating area by not having to leave space for that door on the right.

Basically, if the answer to one and two are yes, you have got to find a way to center the TV and speakers on the wall so they are not set off to one side. You also need to have one seat centered between the two main Left & Right speakers in an approximate equalateral triangle.

Famous
Nice project that you have going there!!!

Make sure you run a few dedicated 15 and/or 20 AMP circuits for your equipment to be powered from.

Why wouldn't you include the Studio 60's in this set-up?

Staff member
Moderator
Congrats on the upcoming build. It looks like a lot of work but I'm 100% positive that you are going to love the results.

My only questions are in regard to the height of the ceiling and how you plan to fit the seating and projector within. My second-row riser is about 12" high. I tried 8" and 10" but found it too short without raising the screen so high that it was uncomfortable to view from the front row. Your drawing looks like you are planning a much shorter riser. The shortest riser I'd recommend is 8". Be careful and account for the the screen height and that the heads of the people in the front row will be higher than the back of the chairs.

Those measurements also impacts that bar behind the second row. I love the idea! But without putting a platform under it, it's going to be a challenge to have it not be too high for bar stools to fit. Bar stools tall enough to serve as a third row are going to be very, very, tall. The tops of the chairs on my second row are about 50" from the floor.

I really love the plan overall though. I can't wait to see the steps along the way.

I like the drawings. Can't wait to keep up with this one.

Since I have come to the conclusion that I will never have a dedicated roo, Hell I don't see ANY upgrades in the forseeable future, I must live vicariously through you guys.
B

I'm also like Randy. If you can, check about some IB subs (like Flints or better). I think Batman might still consider them or did). Could be cheaper.....
Keep us posted.
By the way...........I'm older than that house... :angry-tappingfoot:

Ok, i'll answer everything after dinner, but for now, here is the as-is drawing:

In other words, it's a blank slate, besides the raised concrete pad where laundry is (have no idea why the pad exists), and the utilities. Along the entire right wall and the top wall (the half to the right of the laundry), there is the sewer drain pipe running along the wall, which is why those finished walls are a foot off the cement block walls.

Staff member
Moderator
Famous
I like your plans seeing as how you're dealing with support poles. If you didn't have the far right pole, I'd suggest running the theater top to bottom to the far right of the plans having theater dimensions of ~ 16x24...but oh well, it still gonna be fun watching this evolve.

When 24 became the second dimension.

Towen7 said:
My second-row riser is about 12" high. I tried 8" and 10" but found it too short without raising the screen so high that it was uncomfortable to view from the front row. Your drawing looks like you are planning a much shorter riser. The shortest riser I'd recommend is 8". Be careful and account for the the screen height and that the heads of the people in the front row will be higher than the back of the chairs.
Click to expand...

- the three steel columns (there's 1 by the stairs) are holding up a steel I-beam running the length of the house. i don't want to eff with those, so they stay where they are. Bats, we did first consider orienting the theater that way, but the column and the required soffit (for the Ibeam and duct work) made us plan on what i'm showing

- I do have questions around soundproofing. I am planning on doing WhisperClips with double drywall (+green glue; thoughts?) for the ceiling. We will be putting insulation above the DD. For where the projector will be, i'll use a 4x8' piece of plywood or OSB for the first layer instead of drywall, so i have flexibility with mounting. The walls i don't really care about soundproofing, but will do DD on the left-side theater wall.

- Exterior walls will be insulated with XPS foam boards glued to the cinder block walls.

- I would consider doing a whole Paradigm Studio setup, but really like the flexibility (and sound, obviously) of the Mackies, and i'd love to keep my Studio60s where they are now in the family room. Also, no amps to buy with the Mackies.

- Not really room within a room; the drawing is just showing finished walls inside the foundation walls

- There are obvious concessions made with regards to the theater, most apparent being the doorway next to the screen, making everything off-center in the room. I wish i could change this, but WAF prevents it. I don't think it'll be a huge deal in terms of actual use, and hopefully the acoustical panels help prevent acoustical mal-effects

- I need to get a building permit for doing improvements inside the house. Was just curious how much detail is normally required on drawings for that purpose.

- With the size (and especially height) constraints, I know the theater won’t be “ideal” at all. That’s not really the goal, either. We want a nice space where we can entertain, have family time, etc. We want it to be easily enjoyed by 8-10 people. As a bonus, I’d like to be able to watch a movie without the kids waking up (daughter’s room is basically right above the theater)

- Seating drawings are placeholders; not sure what config they will be

- I will make sure I get 2x 20amp circuits just to the equipment rack, as well as another dedicated one just for the front wall (2 subs and 3 powered speakers)

- Was planning an 8” riser, so that I didn’t need an intermediate step. I don’t want to go higher than that anyway, to ensure head-clearance.

- Thanks for the comments on the barstools for a 3rd row. You’re right they may not be able to see over the second row… will have to ponder that